Tongue Fu are long-time regulars here at Rich Mix (ten years and counting), and if you’ve been to one of their nights before, you’ll know they’re packed full of poets, writers and storytellers taking to the stage (without rehearsing beforehand) to perform live, amplified by improvisations from the Tongue Fu band and adhoc-yet-masterful visuals.

It’s hard to resist the magic of a Tongue Fu performance in motion, which might be why distilling that essence has taken a little time.

While the full length is due for release later this autumn, you won’t need to wait around for the first single from the album, also called Boat Building. The incredibly special title track is as much of a sound for now as there can be: rousing, arresting, and (as we find out below) a call to action.

Chris’ Spotify playlist is packed full of some of the most exciting artists working in the UK at the moment – Shabaka Hutchings, Melt Yourself Down, Snapped Ankles, Dizraeli and Kate Tempest are all in the mix, set alongside his new single.

Find somewhere quiet to sit, press play, and then spend some time reading through Chris’ interview.

RM: How did you begin Tongue Fu?

CR: It was an accident, like all the best ideas. I was a control freak – I used to write all the words and music for a band I was in with bassist, Riaan Vosloo, who, growing tired of my dictatorial pedantry, gave me a prod into letting go of the reins a little. We decided to do some gigs with poets and musicians with no rehearsal, to see what happened if we took away the safety net. It felt a bit like flying. We never rehearsed again.

RM: Did you set out to be either a writer or a musician?

CR: I studied music and played drums in bands for years, then got into producing music and working in theatre and dance. Writing was something I developed alongside, quietly, through my 20s, until the urge to perform my writing became a compulsion as strong as the music. I jumped out of the multi-billion pound music industry into the multi-hundred pound poetry industry. Some things aren’t worth thinking about too much.

RM: Why do you do Tongue Fu – what motivates you each day?

CR: I believe wholeheartedly in the power of the collective. I love what happens when you get great people together taking risks and collaborating. Something happens that is unique to that moment and the specific combination of performers, audience and time. We all serve the whole, the moment, and are lifted by each other. 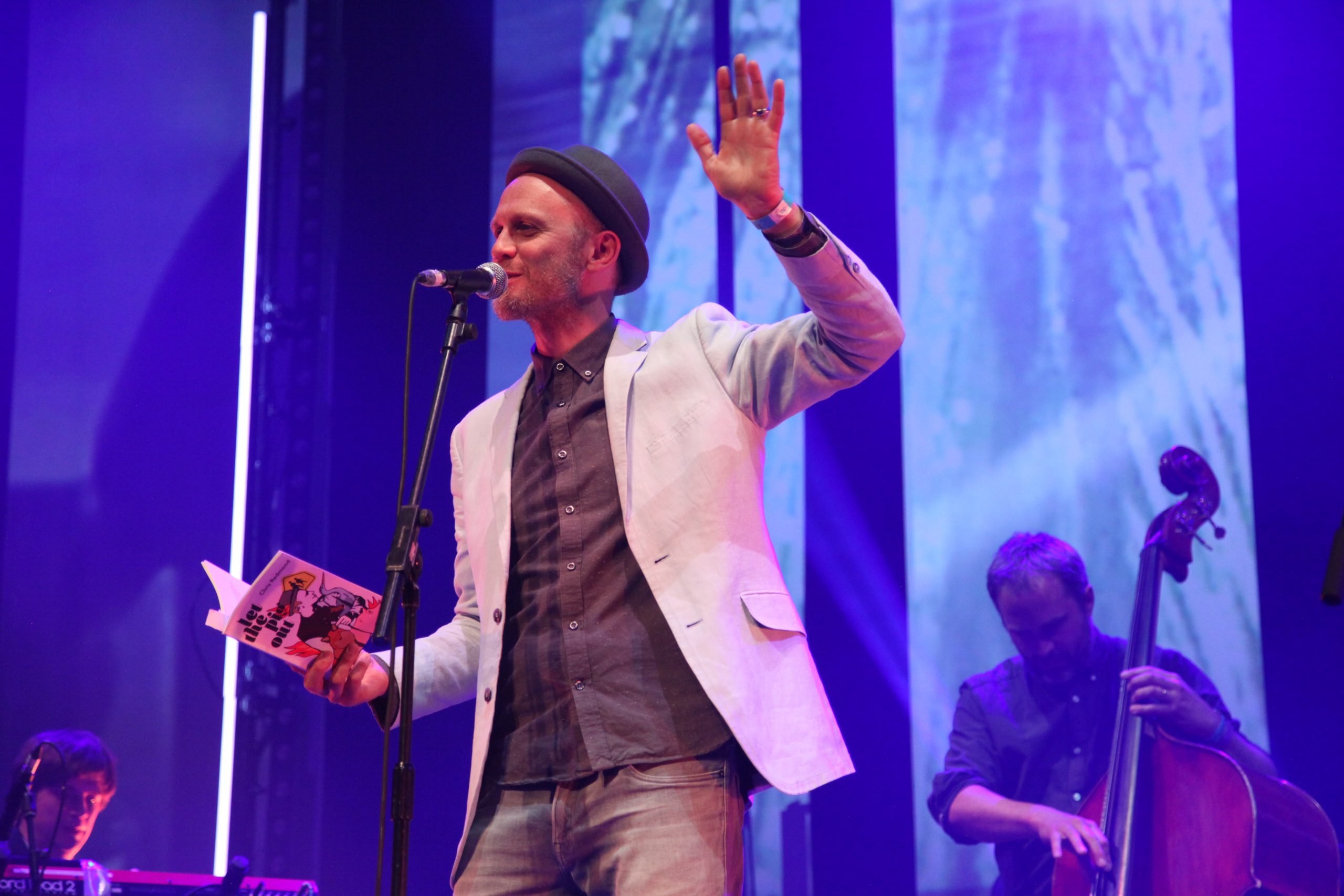 Chris and the Tongue Fu band performing at Rich Mix.

RM: How have you stayed inspired this year? Are there any artists or contemporaries whose vision has inspired you?

CR: It has been a bumpy ride hasn’t it?! I have been grateful that we were in the final stages of finishing our album, so I’ve been able to give that far more attention than I might have, if lockdown didn’t happen. Every single artist and musician on the album is a source of inspiration to me. I listen to and read their work frequently – they are Vanessa Kisuule, Dizraeli, Amyra Leon, Zia Ahmed, Rafeef Ziadah, Anthony Anaxagorou, Joshua Idehen and most recently Kweku Sackey aka K.O.G. I have been listening to them A LOT and I don’t tire of them.

Beyond that, my listening is pretty mixed. I live with my wife and daughters so we mix and match. I’ve been listening to Anthony Joseph, Kamasi Washington, This Is The Kit, Tom Waits. My daughters have been having a Billie Eilish fest along with the genius Tim Minchin’s songs from Matilda and my wife is really into the Ukranian band, DakhaBrakha, so it’s a pretty mixed bag in our house.

Three of my favourite books I’ve read over lockdown have been Anthony Anaxagorou’s ‘After The Formalities’, Roger Robinson’s  ‘A Portable Paradise’ and ‘The Night Wages’ by Martin Shaw. All are remarkable.

RM; How has your approach to poetry changed over the years? Has it changed at all this year?

CR: I don’t sit in a style for very long, before I want to move on to the next thing. I often write before I know what it’s going to be – then once enough has come out, I get a sense that, oh, this is a song, or this one rhymes and is fun or this is cynical and angry etc.

My writing always reflects my mood and that is affected a lot by what’s going on in the world, so it’s not been the cheeriest material of late, to be honest. I’ve been writing a journal for the first time in years, throughout lockdown. It’s helped me process what’s going on and it keeps the machinery oiled so when a poem comes I can nut it out fairly efficiently.

RM: Can you tell us about your new single with Tongue Fu, Boat Building?

CR: Yes! It’s the title track from the album and it’s a moody, brooding swirling maelstrom that travels from insomniac doom scrolling on my phone, railing against the evils of capitalism, to meeting a mythical ocean griffin with the voice of Nina Simone who reminds me of the power of the imagination and the need for community and solidarity. It is inspired by the people powered movements of the Climate Protests and Black Lives Matter. It’s a note to self, a call to action, and a ferocious drum beat by Pat Davey. I don’t think it’s going to get playlisted on Radio 1.

RM: How did you record it? Who else was involved in creating it – who are the other musicians?

CR: It, like the whole album, started in improvisation. Myself, Pat (drums), Riaan (bass) and Arthur Lea (keys). recorded some takes with Ben Lamdin from Nostalgia 77, who we’ve worked with before, at Fishmarket Studios. Riaan then took the recorded improvisations away and poured some sort of electric rocket light over them. It’s got extra vocals on from Bristol jazz boss, Victoria Klewin and the wonder lungs of Hannah Williams (who sang on Jay Z’s 4.44) and a gazillion layers of griffin-synth-bass (TM).

RM: What’s the perfect setting to listen to it?

CR: Good headphones – loud, closed eyes, with a bit of time and space. It’s quite a lump to swallow down in one go.

RM: Speaking of setting the scene, you’ve also curated a Spotify Playlist for us. Can you tell us a bit about your influences for Boat Building? What can listeners expect to find in the playlist?

CR: It’s a pretty broad palette that we’ve drawn on for the album. There are so many people involved, each bringing their own influences, it’s pretty hard to put it into a cohesive list. I think we’ve made something that stands up as it’s own thing, but crackles and pops with all the flavours of those involved. The playlist is a mix of artists who I find an inspiration, some of whom are on the album, some of whom play with us from time to time, some whom I simply admire. The playlist has come out a bit moody, but there’s uplift and groove, heart and great lyrics. I enjoyed putting it together. Thanks for the invitation.

RM: And finally…What do you see on the horizon for Tongue Fu?

CR: We are releasing the album in November with three videos in the run up to that. We’ll be trying our best to get people to listen to the album for the next ten to twenty years or so, I imagine. There’s so much amazing music out there, it’s a little bit daunting, but we’ll give it a good crack.

We have some plans to do some live/recorded sessions next year and we’re also working on a new commission with Hollie McNish, Salena Godden and Vanessa Kisuule. AND we’re making a bunch of material for children for our Tongue Fu for Kids project. Beyond that, I reeeeeallllly hope we get to play some gigs again soon. I’m missing it. We need to get together. It’s what people do. And when we can, finally, it’s going to feel amazing.

RM: Thank you so much for your time, Chris.

Boat Building is out now and available to listen and download on Apple Music and Spotify.

Check in with Tongue Fu’s website for more details of their album release later this autumn.